JUDGES - At The Core of Media Awards

They are the undaunted professionals; trusted, tested and true. Men and women with more than twenty years experience in media practice, who willingly answer calls to better the Nigerian media even when those calls are not convenient. On this occasion of the 16th DAME Retreat in September, they had just surmounted the notorious traffic hold-up of Victoria Island to gather in the distant but serene environment of the Peninsular Resort, Ajah to consider the reports of the sub-committees set up earlier to assess submitted entries for the awards. They are judges of the Diamond Awards for Media Excellence……Read More 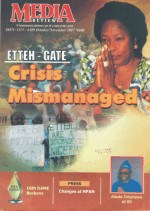 For five months, Mrs. Patricia Etteh dominated the media scene. Her emergence as the Speaker of the House of Representatives, the first woman to occupy such position in the history of Nigeria, and the scandal involving the renovation of her residence and that of her deputy, Babangida Nguroje, generated waves that reverberated on the pages of newspapers…..Read More 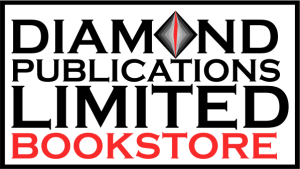 Projecting Yar'Adua and His Government

There are a lot of differences in the policy thrust of President Umaru Musa Yar’Adua and his predecessor, Chief Olusegun Obasanjo. Although, the former in his inaugural speech on May 29, after being sworn in as President said, “We are not starting from the scratch”, which suggested some inheritance from the outgone regime, he has on occasions jettisoned and departed from policies of the latter…..Read More 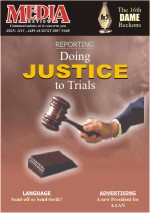 How not to report trials

It is a season of high profile trials. From the various petitions at the election petition tribunals to the trials of former governors, Nigeria’s judiciary is perhaps facing one of its greatest challenges. The cases at hand, the fallouts of the April general elections and the allegations of corruption and embezzlement against some former governors have drawn international attention to the country…..Read More 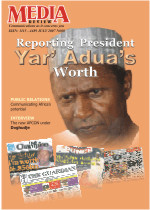 What's the President's worth?

On Thursday, June 28, a month after assuming office as Nigeria’s President, President Umaru Musa Yar’Adua did something extraordinary. He became the first sitting Presidents in the history of Nigeria to declare his assets, publicly. He went against the counsel of Code of Conduct Bureau, which reportedly advised him against the declaration, as it said, such action would put pressure on other categories of public officers to do same, even when Constitution makes the exercise a confidential matter…..Read More